No games to display

The Adelaide suburb of Morphettville, 10km from the city centre, is the headquarters for racing in South Australia.

Racing commenced here in 1875 and the course was purchased outright by the club in 1889. Since the closure of the South Australian Jockey Club's former base at the Victoria Park course in 2008 and then the Cheltenham Park course in 2009, it is the only metropolitan course located in Adelaide.

To cope with year-round racing, an inner track was opened in 2009, known as the Morphettville Parks circuit.

In a world first a retractable hydraulic winning post was also installed to service both courses, so that the post can be moved between the two tracks with minimal damage to the racing surfaces.

The infield of the track features a wetlands area, which is used as a water catchment for irrigation of the course. Adelaide Cup day in March was proclaimed a public holiday for the city in 1973.

While the race was downgraded to Group 2 status in 2007, this time-honoured 3200m race with a history dating back to 1864 remains the social highlight of the Adelaide racing calendar. 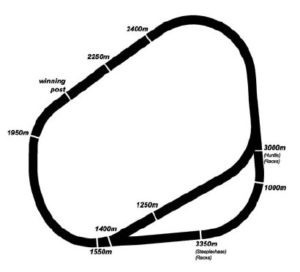 The outer Morphettville track is an irregular or triangular oval shape with a circumference of 2307m and a home straight of 340m.

All of the feature races are conducted on the outer track. Out of the straight. runners are on a bend to the 1750m. It is a straight run of over 500m before the turn to the side of the course. then a run of 400m to the home turn.

The chute start for the 1800m races joins the back of the course, with a run of 500 metres before the first bend.

2000 metre races begin from a spur that links up with the top of the bend out of the home straight, providing a run of only 150m until the first bend. Inside draws are a considerable advantage.

The Adelaide Cup start at the 3200m gives only a very short run to the home turn. While the distance of the race offsets the barrier draws to an extent, a low draw is still preferable.
Morphettville is considered one Australia's fairest tracks. 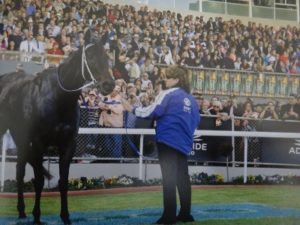 Black Caviar at Morphettville to run in the Robert Sangster Stakes

Map and Directions to Morphettville Racecourse